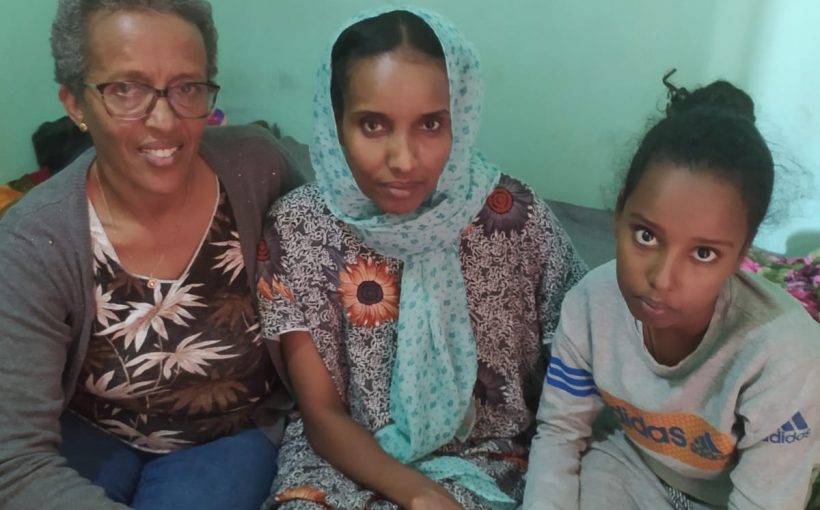 Donations could save a life

Tübingen/ Asmara/ Addis Ababa: Dorothea Graf from the association „Aktion Eine Welt“ based in Tübingen has an urgent concern. The association supports the seriously ill eleven-year-old Aryam from Eritrea. The child has Hodgkin’s lymphoma. This form of blood cancer is always fatal if left untreated. However, with chemotherapy and possibly other additional forms of oncological treatment, most of the sick children have the prospect of being completely cured. But in Eritrea?

Flashback: Over the course of six months, Aryam noticed that her lymph nodes in her groin were slowly but steadily swollen. From time to time she would have inexplicable bouts of fever.

An odyssey full of suffering and pain begins

On May 31, 2022, doctors from the „Medical Board“ in the large Orotta Hospital in the Eritrean capital Asmara gave her the suspected diagnosis of „Hodgkin’s lymphoma“. But instead of further urgently needed diagnostics and the start of life-saving chemotherapy, Aryam and her mother began an odyssey full of pain and fear. In the same report, the „Medical Board“ noted that no treatment was possible for Aryam in Eritrea. They therefore recommended going abroad. But for Aryam and her family, an anxious wait began in September until all the necessary documents for the trip to the Ethiopian capital Addis Ababa, together with her mother, were presented.

But disillusionment soon set in there, too. The search for doctors specializing in the treatment of childhood cancer turned out to be very difficult and time-consuming. It was only at the beginning of November that a tissue sample confirmed the serious suspicion of the doctors from Asmara: „Classic Hodgkin’s lymphoma“. But even then, no treatment was started there. Also: For Aryam’s livelihood in Addis Ababa, and the investigations that had taken place up to that point, the money was not enough. Could Uncle Yemane be able to mediate help?

Aryam’s 61-year-old uncle turned to Dorothea Graf from the „Aktion Eine Welt“ association with a request for the urgently needed medical treatment. She spoke to the Münster journalist and musician Ulrich Coppel because she knew that he had repeatedly arranged life-saving medical treatment for Eritrean people in Germany in the past.

Coppel’s initial searches in large medical databases fueled the suspicion that treatment for Aryam in Ethiopia might very well be possible. On the other hand, treatment in Germany initially considered by the uncle would only mean further unnecessary loss of time due to the complex formalities involved in obtaining a visa and the complete pre-financing that is due. In addition, the treatment in Germany would certainly be many times more expensive, explained Coppel numerous German experts. They therefore also advised treatment in Ethiopia.

But Aryam and her mother did not find a doctor who could help them in various hospitals in Addis Ababa, despite several visits and waiting for whole days on site. There were also major language problems.

Coppel therefore turned to an Eritrean family doctor who was a friend of his in Germany and arranged contact with his Eritrean friend Ghennet Bokretzion Ghedde, in whose family there are doctors. A day later, Aryam’s father, Yonas, rang at Ghennte’s doorstep in Asmara. For this he left Aryam’s five siblings between two and 16 years old alone at home in Keren and took a day’s journey. Everyone involved decided together: Ghennet must travel to Addis Ababa as quickly as possible to help the desperate mother organize her daughter’s treatment.

During her two-week stay there, Ghennet managed to finally start Aryam’s chemotherapy three days before Christmas at the Lancet Hospital in Addis Ababa. The last preliminary examinations carried out in the days before showed that despite the long period of suffering without treatment, Aryam’s Hodgkin lymphoma was still in an early stage. This gave her and the whole family hope. But the next few months will be a difficult time. Aryam has to be in quarantine for six months during chemotherapy. Any small infection could become life-threatening for her. For the same reason, she and her mother need an apartment close to the hospital that meets increased hygienic requirements. All of this costs money – which the two of them don’t have. Based on the information from the Lancet Hospital, Coppel, Graf and their family doctor friend calculate the costs for the entire treatment and living expenses at around 25,000 euros, but expressly point out the high volatility when determining the costs. Again and again during the period of chemotherapy, tests will show how it responds. In the end, fewer courses or additional treatments could be necessary.

The non-profit association “Aktion Eine Welt” is therefore making an appeal to the public. So far, the club has paid 3500 euros in advance. However, neither the club nor the uncle and the entire family do not have sufficient funds of their own to finance the costs incurred. With donations to the association for the financing of treatment, Aryam can very likely get well again. The German Children’s Cancer Registry puts the long-term survival rate for children after Hodgkin’s lymphoma therapy on its website at 97 percent.

Donation receipts can be issued.